Shortly after Kai's passing, Kabuki began being extra needy and loving. He would constantly seek us out, following us from room to room. I knew he just needed more love and affection.

Over time he started going in the opposite direction. He eventually spent more time away from us than around us - and it had never been that way before. He was getting lonely. It broke my heart when I took notice and made a point of keeping track of him. It was time to find him another companion. 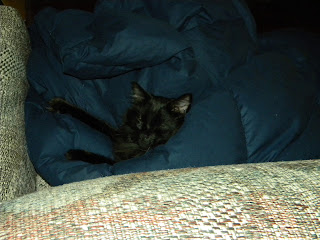 Obviously we could never replace Kai - nor would we want to. Our only hope was that a new kitty could be friends with Kabuki. They could play around and keep each other company when we are out of the house. Normal stuff.

So I kicked up my kitten search. I went to Craigslist, which I generally avoid since there is no accountability. Literally any one can post anything and try to scam you. I found a cute little kitten and we went and picked him up on Saturday.

He has cute little mewls that sound exactly like Kabuki when he was that little. He starts purring almost immediately - just like Kai and quite a bit like Kabuki as well. Since he's a kitten still he loves to play, all the time. So adorable! 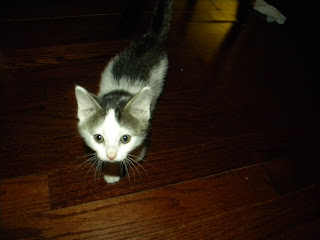 His name is Ludo.

Kabuki has been a bit shy around him, but they actually cuddled today! For 2 minutes, but still counts! Generally, Ludo tries to play with Kabuki, who plays back a little bit but then runs away. They are hilarious. Kabuki is pretty much back to normal! Once he is used to Ludo I'm confident he will be completely normal again. 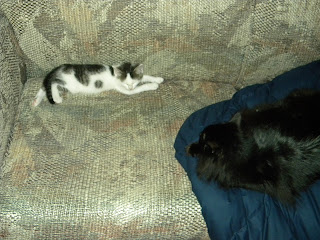