With the multitudes of clashing information out there, it can be easy to come to different conclusions regarding immunizations. The purpose of this series is to shed some light and dispel the biggest myths surrounding vaccinations.

Myth 1:
"Decline in Rates of diseases prevented by vaccines are due to better hygiene and healthcare; not vaccines."


This first graph is often reported as the proof that disease rates for vaccine-preventable diseases were in decline long before the vaccines were in effect; purportedly due to better healthcare, sanitation standards, and cleaner living. Looking at the graphs, it appears to give a clear conclusion in opposition to vaccines. However, it is important to note the distinction that these graphs show death rates in decline - not rates of the disease being contracted declining.This simply means that people were living with these diseases, or at least for longer periods before succumbing to them.
With advancing healthcare and cleaner living standards, it is no wonder the death rates were in decline even before the invention of vaccines. People who contracted polio were no longer dying so quickly - in fact, with the invention of the iron lung, those people could continue to live for up to decades. 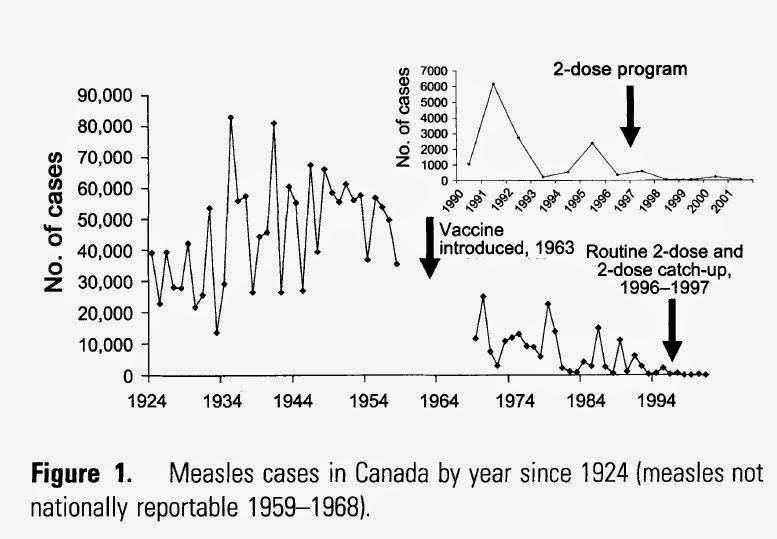 For some context of vaccine success from other continents, here is a quote from CDC (linked through WHO at the bottom). This quote is in regards to developed countries who started with high vaccination rates. Those rates decreased as people saw less of each disease, and the diseases bounced right back, despite similar or better rates of sanitation and healthcare.

"Finally, we can look at the experiences of several developed countries after they let their immunization levels drop. Three countries – Great Britain, Sweden, and Japan – cut back the use of pertussis vaccine because of fear about the vaccine. The effect was dramatic and immediate. In Great Britain, a drop in pertussis vaccination in 1974 was followed by an epidemic of more than 100,000 cases of pertussis and 36 deaths by 1978. In Japan, around the same time, a drop in vaccination rates from 70% to 20%-40% led to a jump in pertussis from 393 cases and no deaths in 1974 to 13,000 cases and 41 deaths in 1979. In Sweden, the annual incidence rate of pertussis per 100,000 children 0-6 years of age increased from 700 cases in 1981 to 3,200 in 1985. It seems clear from these experiences that not only would diseases not be disappearing without vaccines, but if we were to stop vaccinating, they would come back."-- CDC Atlanta "Six Common Misconceptions about Immunization"


Resources/More Information:
JAMA - Historical Comparisons of Morbidity and Mortality for Vaccine-Preventable Diseases in the United States
WHO - Six Common Misconceptions - "2. Diseases had already..."
The Intellectual Dishonesty of the "Vaccines Didn't Save Us" Gambit


Myth 2:
"Complications and risks of vaccine-preventable diseases aren't that bad."

Many of those who are against vaccination claim that contracting one (or all) of these diseases is not all that dangerous. Here are the statistics on several vaccine-preventable diseases.

Measles
Complications of contracting the measles range from common and inconvenient to life-threatening dependent on a number of factors.
Common complications include ear infections (1 in 10 children experience this) and poorly treated/untreated could potentially lead to permanent hearing loss. Additionally, 1 in 10 adults are likely to experience diarrhea.
Severe Complications include pneumonia and encephalitis. Up to 1 in 20 children with measles will get pneumonia, which is the most common cause of death in young children with measles. Roughly 1 in 1,000 children who get measles will develop encephalitis, which is swelling of the brain. This can lead to convulsions - ultimately it can cause the child to be permanently deaf or with an intellectual disability. For pregnant women, measles can cause premature birth or a low birth weight baby.
There is also a very rare long-term complication that develops roughly 7 to 10 years after a seemingly full recovery from measles - Subacute sclerosing panencephalitis (SSPE). When measles was widespread and quite common, this disease of the nervous system occurred in 4 to 11 out of 100,000 people who had contracted measles.


Pertussis/Whooping Cough
As with the measles, pertussis can have some life-threatening complications stemming from contracting the disease.
Infants and young children are at the highest risk for severe complications from pertussis. Infants who contract the disease are about 50% likely to be hospitalized from it. Of those hospitalized, there are a number of further complications, including:
Source: CDC - Pertussis | Complications

Pneumococcal Disease(s)
The most severe type of invasive pneumococcal disease is meningitis. For children under 5 years old, roughly 1 in 10 dies of the infection, while others may develop hearing loss or developmental delay.
Bacteremia is another type of invasive pneumococcal disease which infects the patient's blood. Children with this form of the disease have about a 4% chance of dying due to the blood infection.
Pneumonia infects the lungs and can cause varying levels of illness in people of any age. Complications of pneumonia include empyema, pericarditis, endobronchial obstruction with atelectasis, and abscesses in the lung. Around 5 in 100 people with pneumonia will die from it.

Empyema - Infection of the areas between membranes surrounding the lungs and chest
Pericarditis - The inflammation of the sac surrounding the heart
Endobronchial obstruction - When the airway that allows air into lungs is blocked
Atelectasis - lung collapse
Abscess - collection of puss
Source: CDC Pneumococcal Disease | Symptoms & Complications

Aluminum
In many vaccines Aluminum salts are used as adjuvants, which are substances that increase the body's immune response to the vaccines. The types of aluminum salts used in some vaccines in the US include aluminum hydroxide, aluminum phosphate, alum/potassium aluminum sulfate, or mixed aluminum salts. These have been used in vaccines like the DTaP, pneumococcal conjugate, and hepatitis B vaccines, as well as others, for over sixty years, and have only rarely been associated with severe reactions.
Source: FDA - Common Ingredients in U.S. Licensed Vaccines

A PubMed Study compared the MRL (minimum risk levels; established by the Agency for Toxic Substances and Disease Registry) to the body burden of aluminum from vaccines as well as diet through the infant's first year of life.


"We conclude that episodic exposures to vaccines that contain aluminum adjuvant continue to be extremely low risk to infants and that the benefits of using vaccines containing aluminum adjuvant outweigh any theoretical concerns."
Source: (ABSTRACT) Updated Aluminum Pharmacokinetics Following Infant Exposures Due to Diet and Vaccination


Mercury/Thimerosal
Except for some flu vaccines, since 2001 thimerosal has not been added to any of the scheduled childhood vaccinations. It is used as a preservative in multi-dose containers of immunizations, which helps to keep the costs down for people getting vaccinated.
Source: CDC - Thimerosal


Formaldehyde
Formaldehyde is used in vaccines in order to inactivate viruses to avoid causing the disease to actually be contracted with the immunization. It also is used to detoxify bacterial toxins - as is the case when used in the diphtheria vaccine.
Formaldehyde is naturally produced by the body when making amino acids, producing energy, and more basic bodily processes. It is also found in our everyday environment. While excessive amounts of formaldehyde may cause cancer, the highest risk is from air pollution, and generally occurs with those who work with formaldehyde directly. When it comes to infants, studies have shown that for a newborn of 6-8 lbs, the amount of formaldehyde at a given moment could be 50-70 times higher than any single vaccine would deposit.
Source: FDA - Common Ingredients in U.S. Licensed Vaccines

Aborted Fetal Tissue
This quote from NCBC summarizes it best:


"Descendant cells are the medium in which these vaccines are prepared. The cell lines under consideration were begun using cells taken from one or more fetuses aborted almost 40 years ago. Since that time the cell lines have grown independently. It is important to note that descendant cells are not the cells of the aborted child. They never, themselves, formed a part of the victim's body."

Source:  NCBC - FAQ on the Use of Vaccine #descendCell

A quick summary on how this is used toward vaccines: A primary cell culture is taken directly from living tissue. By isolating single types of cells within a culture we can develop a cell line, which can then be used for continuous observation and control otherwise not possible. Using these cell lines, researchers are able to grow human pathogens and attenuate (weaken) them. One way of doing so would be to alter the virus so that it is unable to grow successfully in normal human body temperature. They do this by repeatedly growing the virus in human cells kept at low temperatures, meaning it works better on low temperatures; worse in actual, live human beings.
Source: History of Vaccines - Human Cell Strains in Vaccine Development

Vaccine Adverse Event Reporting System (VAERS) is often referred to as the evidence of large amounts of complications due to vaccines themselves. However, it is important to consider this (from the CDC on the actual VAERS site):


"When evaluating data from VAERS, it is important to note that for any reported event, no cause-and-effect relationship has been established. Reports of all possible associations between vaccines and adverse events (possible side effects) are filed in VAERS. Therefore, VAERS collects data on any adverse event following vaccination, be it coincidental or truly caused by a vaccine. The report of an adverse event to VAERS is not documentation that a vaccine caused the event."

In other words, there is no evidence behind the claims made by those who posted.

And now, some specific comparisons between the severe risks of vaccine-preventable diseases, and the severe risks of immunizations for those diseases.
-------------------
MMR Complications
Fewer than 1 in 1,000,000 have a severe allergic reaction
Even fewer than that (so few that the number cannot be pinpointed) can develop deafness, long-term seizures, permanent brain damage
Source: CDC - What are the Risks from MMR Vaccine?

Mumps
1 in 20,000 young children can develop permanent deafness
2 in 100,000 children develop encephalitis (inflammation of the brain)
15 in 100 adults will develop meningitis (infection of the covering around the brain and spinal cord)
5 in 100 adults will develop pancreatitis (swelling of the pancreas)
Source: (PDF) CDC -  Mumps | Complications from Mumps

Rubella
1 in 6,000 cases develops encephalitis (inflammation of the brain)
Up to 85% of infants infected during the first trimester of pregnancy will be born with birth defects, which could include deafness, eye defects, heart defects, and mental retardation
Source: (PDF) Immunize.org - Rubella: Questions and Answers
-------------------

Diphtheria
1 in 10 patients can die even with treatment - without treatment the number is as high as 1 in 2 people die.
Source: CDC - Diphtheria | Complications

Tetanus
About 11 in 100 reported cases are fatal
About 50-70 in 100 develop aspiration pneumonia
Source: CDC - Pinkbook - Tetanus

It is important for everyone to read and do their own research, and make certain to avoid echo chambers where people just continuously repeat and reiterate the same points. Find new resources, but be sure to check for validity of the source.

If you would like more explanation or in-depth answers, or you have alternate sources you would like me to consider, please leave me a comment. Also, feel free to comment on the vaccine myths you'd like to see discussed.
Posted by Unknown at 10:14 PM

Email ThisBlogThis!Share to TwitterShare to FacebookShare to Pinterest
Labels: Vaccines